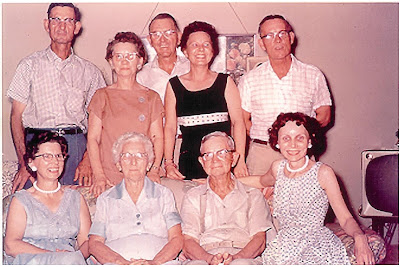 One funny story about this photo worth preserving: Aunt Jenny (my favorite aunt) was not wearing a dress that day (she was likely wearing shorts), so when it came time for the family photo, she needed to borrow the black dress and white plastic belt from her niece (Aunt Naomi's daughter, Billy Jean Tollison Goss). When Aunt Jenny passed away in early 1992, it was then that I first began doing serious genealogical research.
Posted by Drew Smith at 8:19 PM