I thought it might be an interesting genealogical research experiment to post what I know about my direct ancestry, one person a day, using ahnentafel numbers.

For those who may not be familiar with the meaning of the word "ahnentafel", it literally means "ancestor table" in German, and refers to a numbering system for direct ancestry, where the beginning person (in this case, me), is "1", my father is "2", my mother is "3", and you get the earlier generations by doubling the number for the father and adding 1 to that number for the mother.  Therefore, your paternal grandfather is 4, your paternal grandmother is 5, your maternal grandfather is 6, and your maternal grandmother is 7.

So if we begin with me, then this posting would discuss the fact that I was born in northern New Jersey, but my family moved to upstate South Carolina when I was 3, and then I moved to Tampa, Florida in 1990 to take a new job.  I have a copy of my birth certificate, and lots of childhood photos, including a newspaper photo that was taken of me when I was only 2, as a result of a baby contest.  I'll include that one below (in case you're wondering, I'm the kid in the sailor suit): 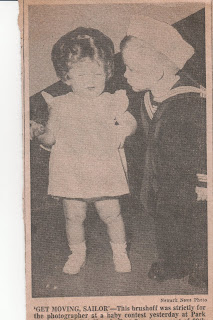 Posted by Drew Smith at 3:40 PM No comments:

Is the recently (a few hours ago?) announced Google+ going to be the next big social networking service (or set of services)?

And if so, how will that impact genealogists?  I can see:

1.  Circles consisting of your genealogy friends.  (And circles for each of your groups of relatives.)

4.  And Huddle for impromptu genealogy discussions via text chat.

Did I leave anything out?
Posted by Drew Smith at 4:39 PM 3 comments:

I looked again at the New York Times and got some details on his earlier life, based upon his first marriage and the death of that wife.

May 14, 1950 issue: He's elected president of the Essex County (NJ) Board of Taxation (he was already a commissioner), and identified as a real estate broker living in East Orange.

April 24, 1951 issue: Mrs. Madelyn Halligan Kelly (his wife) dies at the age of 29 after an operation.  Kelly is identified as president of the trucking concern of Ferris & Rossborough, Inc.

Using this information, I was able to use Ancestry.com to find the wedding announcement for his first marriage (January 17, 1948).  It identified one of his sisters as Anastacia Elizabeth Kelly, and said that James W. Kelly, Jr. had attended St. Benedict's Preparatory School, and had been a Naval Reserve lieutenant commander in the Pacific during World War II.  Kelly's mother was already deceased.

Finding the siblings or his 2nd wife may help in figuring out what happened to him after 1970.
Posted by Drew Smith at 8:15 PM No comments:


My brother Jeff has begun a new blog about the elementary school he attended in East Orange, New Jersey, during the late 1950s: Stockton School.  I'm enjoying seeing the photos and reading his postings about some of the people whom he went to school with or who taught there.

One of his more recent postings mentioned an occasion where he met the mayor of East Orange, James W. Kelly, Jr.  What baffles him (and me) is that we can't find anything about Kelly after he left office in 1970.  I plan to keep searching, but unless Kelly is still alive somewhere (living off the grid in a retirement community?), I find it hard to believe that I can't find any record of his death.  Unfortunately, "James Kelly" is such a common name that I can't say for certain that one of the ones in the Social Security Death Index isn't him.

If someone out there happens to know something about what happened to Mayor Kelly after 1970, I'm sure that Jeff and I would love to hear about it.
Posted by Drew Smith at 3:44 PM No comments: