The home office credenza on the left - first pass

In my previous posting, I provided a photo of a credenza that sits immediately to my left as I work on my computer desk. There were obviously too many things taking up space on top, a set of books on the shelf underneath that probably included some items that I would rarely if ever consult, and a shelf beneath that one with mostly large map books.

Here is how the space looks now: 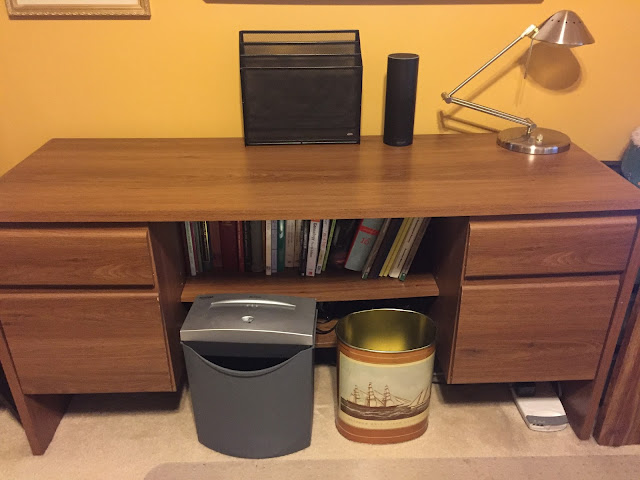 The upright file has been cleared of its store coupons (thanks to long-time podcast listener Mike Scozzari for his suggestion about putting those into large plastic storage bags and moving them to the cars, where they are actually needed). It is now ready for the occasional paper, magazine, or book that is needed for an ongoing project.

The inbox (which was really just a stacking place) has been moved to another part of the office, and those papers will become part of the ones that will need to be gone through in a later project.

The map books, with rare exception, weren't of any historical value and were seriously outdated, so the outdated ones went into the trash. The lowest shelf instead now holds the podcasting equipment that George and I use every 2 weeks.

I reviewed the books, moving a number of them to bookshelves much further away (outside my office), and keeping only the ones that pertained directly to my current research or that were useful for reference purposes.

So what is left to do?

First, I want to go through the books that I have kept on the shelf and enter them into my LibraryThing catalog. Some of them may already be there, but I'm certain that not all of them are.

Second, I'll need to address what is in the drawers.
Posted by Drew Smith at 8:35 AM